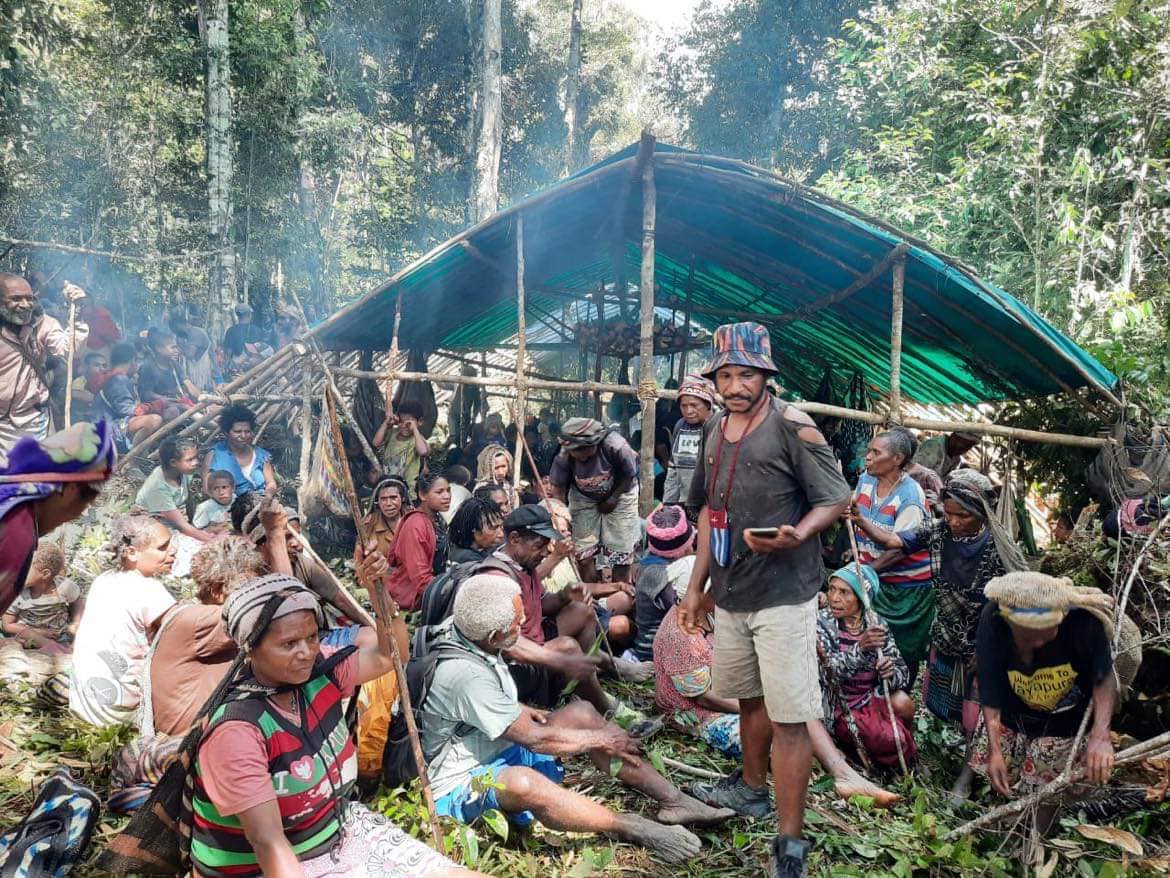 Armed conflict in West Papua has caused an exodus of displaced people into one of the most remote parts of neighbouring Papua New Guinea.

The latest flashpoint in the conflict is in the Indonesian-administered Bintang Mountains regency, where state forces are pursuing West Papua Liberation Army fighters who they blame for recent attacks on health workers in Kiwirok district.

At least two thousand people are recorded by local groups to have fled from the conflict either to other parts of Bintang Mountains (Pegunungan Bintang) or crossed illegally into the adjacent region over the international border.

Hundreds of people have fled across to Tumolbil, in Yapsie sub-district of the PNG province of West Sepik, situated right on the border.

A spokesman for the OPM, Jeffrey Bomanak, said that those fleeing are running from Indonesian military operations, including helicopter assaults, which he claimed have caused significant destruction in around 14 villages.

“Our people, they cannot stay with that situation, so they are crossing to Papua New Guinea side.

“I already contacted my network, our soldiers from OPM, TPN (Liberation Army). They already confirmed 47 families in Tumolbil.”

A teacher in Yapsie, Paul Alp, said he saw evidence of the influx in Tumolbil last week.

“There are foot tracks,” he explained, adding that Papua New Guineans sometimes went across to the Indonesian side, usually to access a better level of basic services.

lp said West Papuans who had come to Tumolbil weren’t necessarily staying for more than a week or so before returning to the other side.

He and others in the remote district confirmed that illegal border crossings have occurred for years, but that it had increased sharply since last month.

For decades, the PNG government’s policy on refugees from West Papua has been to place them in border camps, the main one being at East Awin in Western Province, with support from the United Nations High Commissioner for Refugees.

Thousands of displaced Papuan have ended up at East Awin, but many others who come across simply melt into the general populace among various remote villages along the porous border region.

Terry Dap is one of a handful of policemen in the entire Telefomin district covering 16,333 square kilometres and with a population of around 50,000.

He said a lot of people had come across to Tumolbil in recent weeks, including OPM fighters.

“There’s a fight going on, on the other side, between the Indonesians and the West Papuan freedom fighters.

“So there’s a lot of disruption there (in Tumolbil). So I went there, and I talked to the ward development officer of Yapsie LLG (Local Level Government area), and he said he needed immediate assistance from the authorities in Vanimo (capital of West Sepik).”

“They want military and police, to protect the sovereignty of Papua New Guinea, and to protect properties to make sure the fight doesn’t come into PNG.”

Sergeant Dap said he had emailed the provincial authorities with this request, and was awaiting feedback.

According to Bomanak, the impacts of displacement from recent attacks in Kiwirok district are ongoing.

“This problem now is we have very damage in village, More civillians will cross over in Papua New Guinea side.

“Five to six hundred villagers, civillians, mothers and children, they’re still in three locations, out in jungle in Kiwirok, and they’re still on their way to Papua New Guinea,” he warned.

On the PNG side, Sergeant Dap said some of the people coming across from West Papua have traditional or familial links to the community of Tulmolbil

But their presence on PNG soil creates risk for locals who are fearful their communities could get caught in the crossfire of Indonesian military pursuing the Papuan fighters.

Dap said he spoke with the OPM fighters who had come to Tumolbil, and encouraged them not to stay long.

“I’ve talked to their commander. They said there’s another group of people coming – about one thousand-plus coming in.

“I told them, just stay for some days and then you go back, because this is another country, so you don’t need to come in. You go back to your own country and then stay there.”

The policeman has also been involved in efforts by PNG authorities to encourage vaccination against Covid-19.

Mistrust of Covid vaccines is deep in PNG, where only around 2 or 3 percent of the population has been inoculated, while a Delta-fuelled third wave of the pandemic is causing daily casualties.

Sergeant Dap said convincing people to get vaccinated was difficult enough without illegal border crossings adding to the spread of the virus and the sense of fear.